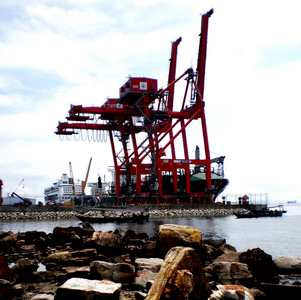 SihanoukVille, Cambodia's building boom continues. It's the rainy season here in Cambodia, construction is difficult in the rain, but the number of new building sites has increased dramatically.

There's been about 15 new hotels or guesthouses opened up in SihanoukVille this year so far, and many more are preparing to open before November or December of this year, when the tourist season traditionally starts.

Many businesses posted their best month on record this past July, as tourist from Europe descended upon town.

The SihanoukVille Port is continuing expansion, a record number of cruise ships and foreign warships are scheduled to use the port facilities, the airport (possibly) is getting ready for scheduled flights.

A city within a city, on several (dozens?) of hectares of land, behind the Sokha Resort has been announced, which will include hotels, residences and offices.

The bridge to the island formerly known as Snake Island continues, and should be finished by 2010 or 2011, and the marina next to the mainland side of the bridge has already rented, sold, or leased several properties, some already occupied.

Real estate prices are climbing again, after about a 30% drop in prices during the past year.

Not much is known about the island developments and oilfield developments off shore.
Posted by SihanoukVille at 9:26 AM No comments: