It's not stopping  yet, here in SihanoukVille, Cambodia.  New roads put in, and old ones upgraded; new hotels, power plants, sewers, government offices, shopping malls, office buildings, and on and on.

Pearl City in back of Sokha and Independence Hotels is nearing compmletion of Phase One, and will have condo's and a shopping mall ready.

The real estate market is slow but improving, and prices remain high, as many people own their land outright, and are not eager to sell until they can get their asking price.

As for the SihanoukVille Airport????


The bridge to Snake Island is making slow but steady progress.

The Marina has some units sold and occupied, and construction is moving along.

Some large residential complexes are either finished, or just finishing up (at least with the initial phases).

Hilton Park Villa and BS Holiday Villa & Condominium on O'Pee street (or is it O'Bye) have sold substantial numbers of units, and the BS Villa has many occupied homes. The project in town at the old bus station has nearly 100 townhomes almost ready. On CT Street, the shopfronts of the only development right on the street are occupied, and construction continues behind. Several (dozen) apartment buildings have been completed this year and are fully occupied.

Power plant construction has begun in Steung Hauv, which may supply electricity to SihanoukVille.

The Port facilities are complete (for the moment. They never stop expanding)


Posted by SihanoukVille at 12:53 PM No comments:

The inland marina is almost (still) finished, with many condos occupied already, the bridge to the island formerly known as Snake Island is about halfway done.  Ocheteaul and Independence beaches are getting facelifts.

Independence Hotel and Sokha Resort are adding hundreds of new rooms and bungalows, and the new Sokha Hotel on Ocheteaul beach is a few years away from completion with 1,000 new rooms. 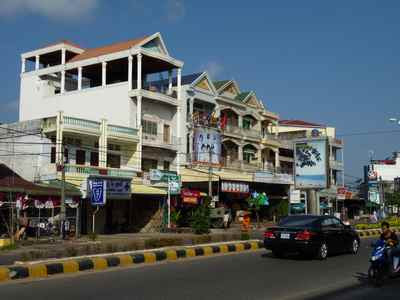 Downtown, there's at least 4 large residential/commercial projects at least 70% finisihed which will provide more than 550 new single family homes and condos as well as commercial space.

New local and national universities are springing up and the existing ones are getting bigger.

The city behind Sokha Resort, has at least 200 apartments up, and it's not 20% finished yet.

Progress on the dozens of island projects remains sketchy, but some are advertising for investors.

The city has opened brand new goverment offices in the last year, such as a new courthouse, city hall, tax office, post office, (still no library or SihanoukVille Museum)

Tourism didn't expand too much this past year, but it didn't decrease either.

Stop lights, street lights, (and police to enforce the laws) are now all over town.
Every major holiday here stresses out the beaches and hotels, but this should get better with more rooms and more beaches opening up.

Worst of all, the local brewery, Angkor Beer, has doubled production, (which was doubled last year as well), and still has to work 24/7 to keep up with demand.

Other coastal towns around SihanoukVille, like Kampot, Kep, Bokor and Koh Kong are also following the same pattern as here, but aren't as developed yet.

It doesn't look like development is going to stop anytime soon in and around SihanoukVille.
Posted by SihanoukVille at 3:49 PM No comments: